Aggression in your dog is just as stressful on them as it is on yourself. Dogs want to get through each day with as little stress as possible, just like humans do.You owe it to yourself to help your dog resolve their aggression problems.
Dog behavior problems are the result of negative experiences, lack of socialization, fear, and sometimes frustration. It is not the natural state of mind for them. When your dog shows signs of aggression, the first thing we do is assess “why” is your dog behaving in the manner that they are? Below we have given you several types of aggressive dogs that we commonly work with and correct in dogs. No matter what type of aggression we are trying to work towards correcting, we advise all owners to actively commit in following the instructions directed in your Greenville training program.

Predatory aggression cannot be corrected because it is directly linked to a dog’s instincts. You can, though, be successful managing your dog’s natural instincts and teach your dog impulse control and by allowing appropriate outlets for them to use their prey drive.

TYPES OF AGGRESSION IN DOGS

Fear Aggression, Dog Aggression, and Predatory Aggression are the most common form of aggression we deal with. This includes aggression with people and children as well. Many Times people say my dog hates other dogs, or my dog hates people, when really what is happening is the act of aggression. Dogs do not “hate”, rather they are reacting as a response to fear, possessiveness, and territorial instincts. In a situation like this, it is important that we reassign the role of leader to owners, instead of your dog, as to not allow your dog to incorrectly make a decision under stress and pressure. Strong leadership can significantly alter your dog’s need to react in a stressful situation. When your dog understands that you are doing the decision making for them, your dog is calmer and can make better choices. 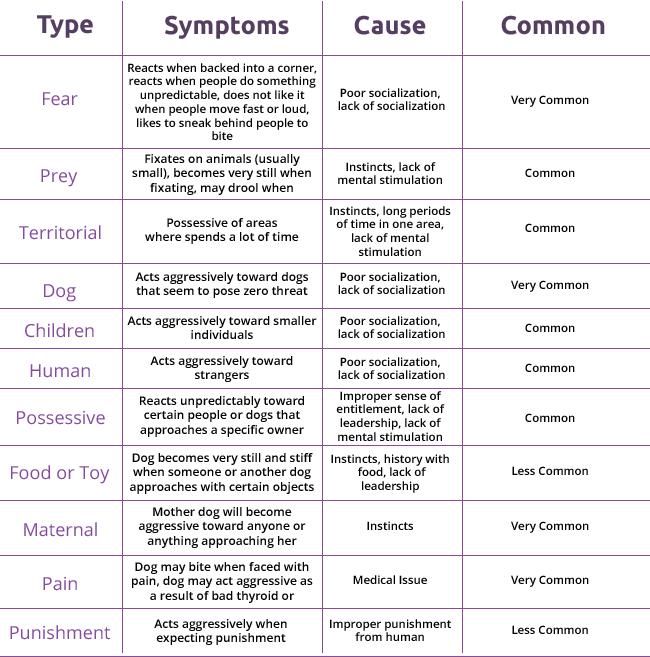 It is becoming very common to see aggressive dogs in today’s society. Dogs often react aggressively towards other dogs who seeming to have posed no threat at all. This does not automatically mean that your dog has an aggressive nature though.

Many times your dog does not have the proper social skills, which is a lot easier to work with than true dog aggression. Dogs are not born aggressive, and aggression is NOT a natural state of mind for a dog. Something has to shape aggressive behavior in your dog, and it is our goal in Greenville to figure that out. More often than not your dog is showing aggression because of a lack in social skills that caused your dog to make a negative association due to one or two bad experiences that they had.
For example, a puppy that has been attacked by an adult dog at an early age. This attack is scary for them, especially if the attack dog was one of the first dogs they had ever met. This attack can also be scary for the owners, which can lead to the owners starting to shelter the puppy, keeping it away from other dogs in fear something will happen again.

This puppy has a very good chance of becoming aggressive when they get older, but  are not likely to show it until they are about 1 or older.
What should have happened instead, is the owner should have found as many friendly dogs as possible to introduce the puppy to, outweighing any negative feeling about the dog that scared the puppy. Meeting 200 friendly dogs after one bad experience is most likely going to make your dog forget the one bad attack and the puppy will be less likely to develop anxiety.

Many people do not realize the importance of socializing their dog and need to practice it through the dog’s lifetime. There are a lot of stories that come to us about how a dog used to be friendly and get along with other dogs, but just do not seem to anymore. This usually happens when owners stop socializing their dog and social skills are lost. For many dogs, social skills are what makes them good around other dogs. Remember that social skills should include socializing your dogs around strange dogs, not just ones that they are familiar with. If you have your dogs around the same group of dogs all the time, they become use to the situation and do not learn any additional skills.
When social skills are lacking, most aggression comes out as fear. It is common that your dog is reacting to feeling uncomfortable. Many dogs become aggressive first so they do not have to go on the defense; it is a solution to a feeling of uncertainty.

At our Greenville center, we will find a way to solve your dog’s problem and make them comfortable in any situation you present them with.

It is way more fun for your dog to walk with a loose leash and enjoy the fresh air and scenery!

PLAYING AT THE PARK

How cool is it to be able to let your dog play at the park and enjoy life!

GETTING THE RIGHT ATTENTION

Be able to give your dog LOTS of love for the right things!